Carbon Fibre rod, increasing the strength of the fuselage

Recently I crashed the bixler, resulting in a broken tail, damaged battery and cracked nose. The causes have now been determined to be as a result of alterations to the fuselage which weakened the tail section. This has now been strengthened with the addition of a Carbon Fibre rod running under the fuselage.

Modifications to increase airflow internally weakened the tail and caused it to fail, possibly in flight. In addition to the loss of tail control,

Shown are the two modifications that have increased the internal airflow. The perfect cross section (Left) shows the two holes drilled to allow air to flow out of the fuselage, which significantly decreased the strength of the tail. 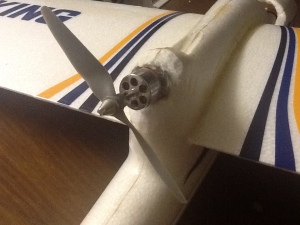 Bench tests were recorded, though were uneventful and about 15 minutes long each and therefore will most likely not be posted because of this. A speed build was also recorded which will likely be posted, along with some internal camera footage to monitor the airflow mods.

Look out for some videos and more posts! I have been busy doing things on the project and have spent less time actually documenting.